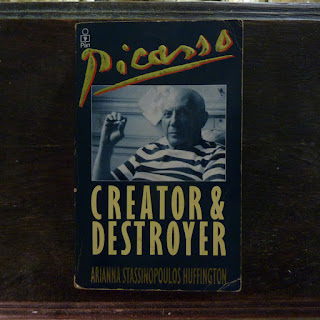 First published in Great Britain 1988 by
George Weidenfeld & Nicholson Ltd
This edition published 1989 by Pan Books Ltd,
Cavaye Place, London SW10 9PG
9 8 7 6 5 4 3 2 1
© Arianna Stassinopoulos Huffington 1988
All rights reserved
ISBN 0 330 30745 2
This book is sold subject to the condition that it
shall not, by way of trade or otherwise, be lent, re-sold,
hired out, or otherwise circulated without the publisher's prior
consent in any form of binding or cover other than that in which
it is published and without a similar condition including this
condition being imposed on the subsequent purchaser.

We have made every effort to appropriately acknowledge all source material and to secure permission
from copyright holders when required. In the event of any question arising as to the source of any
material, we will be pleased to make the necessary acknowledgement in future printings. Thanks are
due to Françoise Gilot and Carlton Lake and to McGraw Hill for their permission to use excerpts
from Life With Picasso, © 1964 Françoise Gilot and Carlton Lake, Letter from Picasso  to Gertrude
Stein, April 1917, published with permission of the Yale Collection of American Literature, Beinecke
Rare Book and Manuscript Library, Yale University. Poem by Picasso dated 5 May 1953 published
with permission of the archives of the Harry Ransom Humanitaries Centre, University of Texas at
Austin.


On 9 December 2017 I ripped the 562 pages from Arianna Stassinopoulos Huffington Picasso - Creator & Destroyer, tore them in half and threw them in the Hole I've been Diggin' for Gordon in a basement at an undisclosed location in Antwerpen since 20 February 2006.
The title refers to Gordon Matta-Clark whose last and major work ‘Office Baroque’ in Antwerpen I illegally visited at the start of my career as an artist. The performance/installation evolved into a ‘mash-up’ with ingredients from the works of various avantgarde artists from the 70’s. For instance a slant row of florescent lights inspired by Dan Flavin takes care of lightning and an endless ladder as imagined by Vito Acconci makes it possible to get in and out of the hole. The work was made visible through a number of side actions and performances where I used some of the dirt I had been digging up. Most of the dirt was used to fill up James Lee Byars' tomb.
As of 9 September 2017 the Hole is filled with precious books from my private library.