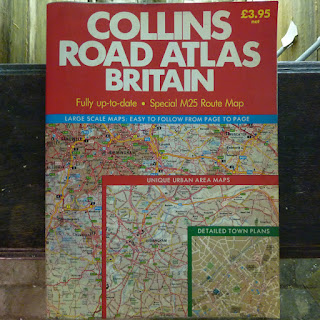 The contents of this edition of
the Road Atlas Britain are believed
correct at the time of printing.
Nevertheless, the publisher can
accept no responsibility for errors
or omissions, or for changes
in the detail given.

Maps of Great Britain are based on
Ordnance Survey maps with the
sanction of the Controller of
Her Majesty's Stationary Office,
Crown Copyright Reserved.

© Wm Collins Sons & Co. Ltd 1986
All rights reserved. No part of this
publication may be reproduced,
stored in a retrieval system, or
transmitted in any form or by any
means electronic, mechanical,
photocopying, recording, or
otherwise unless the permission of
the publishers has been given
beforehand.


On 14 October 2017 I ripped the 130 pages from Collins Road Atlas Britain, tore them in half and threw them in the Hole I've been Diggin' for Gordon in a basement at an undisclosed location in Antwerpen since 20 February 2006.
The title refers to Gordon Matta-Clark whose last and major work ‘Office Baroque’ in Antwerpen I illegally visited at the start of my career as an artist. The performance/installation evolved into a ‘mash-up’ with ingredients from the works of various avantgarde artists from the 70’s. For instance a slant row of florescent lights inspired by Dan Flavin takes care of lightning and an endless ladder as imagined by Vito Acconci makes it possible to get in and out of the hole. The work was made visible through a number of side actions and performances where I used some of the dirt I had been digging up. Most of the dirt was used to fill up James Lee Byars' tomb.
As of 9 September 2017 the Hole is filled with precious books from my private library.